AMUNISINEWS.COM, Jakarta – DDoS attacks are becoming increasingly reality in operating the business with the internet presence. This attack could spend tremendous amounts of money, not only in lost uptime, but also loss of consumer confidence and public relations crisis. Last year the DDoS attack itself lost $ 150 billion, while the average company could spend more than $ 5,000 per month on protection from other DDoS protection services, even if they never experienced an attack. This happens while most of the computing power and bandwidth in the world are unused. Gladius imagines a future where this vast resource can be exploited to reduce attacks.
By utilizing blockchain to enable communication between computers, and pay as you go to the market, Gladius can facilitate the creation of a fault-tolerant and inexpensive pool that is tailored to the client’s specific needs. In addition to filtering only traffic, this pool can also speed up content.

Since the beginning of the internet, the technology around the website has continued to grow. With this new technology comes the power to increase the online presence of the business but also hurt it. Technology is really the two largest-edged sword. Gladius’s mission is to eliminate losses caused by new vulnerabilities and utilize the same decentralized networking style that has been used by attackers for a long time. Gladius mainly deals with the protection of DDoS attackers and the application of high quality CDN.

While there are many people who believe that DDoS protection is only needed in very few situations, DDoS protection is important for entities that have a presence on the internet. DDoS attacks cost millions for household names like Blizzard Entertainment, BBC, and GitHub. The average DDoS attack cost the company 2.5 million dollars.

Every business wants to increase the speed of their site and also their response time. A well-done CDN can do not only that but also extend the reach of a site that offers unparalleled access in every corner of the world. The big profit CDN gives to businesses is easily seen by the fact that the CDN market by 2015 is worth $ 4.95 billion but is expected to more than triple by 2020 to $ 15.73 billion.

The ability to greatly, if not completely, eliminate DDoS attacks and the ability to create effective and secure CDNs put the Gladius team in a unique position. The team’s goal is to fully utilize blockchain technology to counter DDoS attacks and provide competitive CDN services. However, above all, the Gladius team is constantly striving towards a highly competitive marketplace to bring consumers the best service. This goal is always at the forefront of Gladius’s mission to make business safer and more effective.

Gladius’s goal is to create a fully decentralized, peer-to-peer network node network to connect a bandwidth pool to a website that seeks DDoS protection and accelerated content delivery. Anyone with a computer can download and run Gladius peer clients in the background to lease their unused bandwidth and earn Gladius Tokens (GLA). Large pools with hundreds, if not thousands, nodes can then handle continuous streams of requests to validate website connections and block malicious activity.

The client node can be started on any Linux, Windows, or MacOS machine and will automatically run in the background when you select it. Users will be part of the local verification pool. Any user-modified website request will grant them a Gladius Token. In turn, users can sell this token back to the website to create an economic cycle that drives the growth of the Gladius Network.

Sites that seek protection can only create accounts on the Gladius website, get the Tokens Gladius, and then request the service in a matter of clicks. As soon as the website is part of the Gladius network, a direct request graph will be available to monitor connection, protection, and speed deltas. 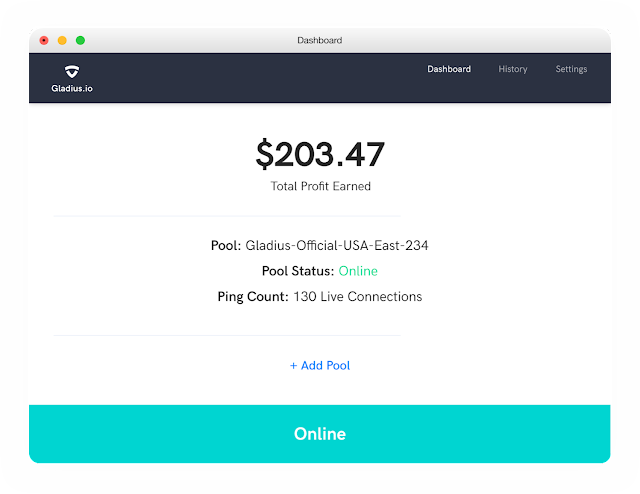 Monitor attacks and bandwidth usage while getting insight into your traffic. All of the portals are easy to use. 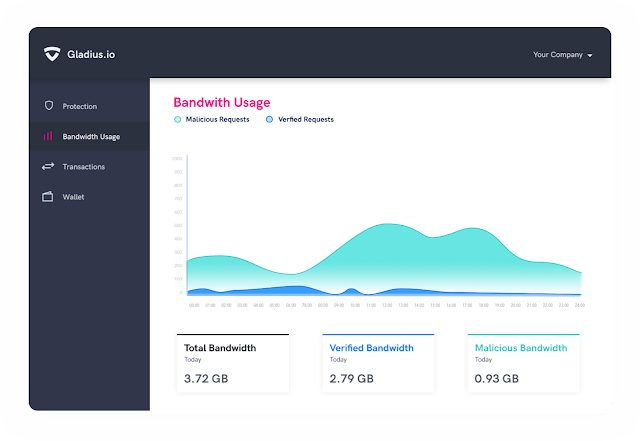 Browse the market and select pools that match your price, location and availability. 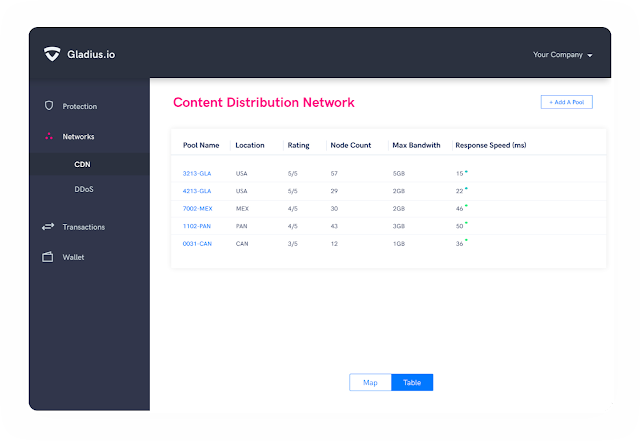 For this platform, Gladius will release Gladius Token, or GLA. The token offer will still be issued during Token Creation and the token will no longer exist.
GLA will be a key component to Gladius Network because it will be used by the website to purchase DDoS and CDN services. The majority of the fees will go to the owner’s node (the individual rents out their backup bandwidth) with a small fraction going back to development and protocol support. All fees will be denominated in GLA, which may change based on supply and demand.
The owners of the previously mentioned nodes that are part of the protection pool will basically act as miners and incentivized with GLA for their network support. Owners will be paid for their respective jobs in this official mining pool. Unlike typical blockchains, mining will be rewarded for sharing bandwidth rather than proof of work, and currency ownership (stock evidence).
Token is designed in such a way that it will likely reflect the growth of Gladius Network. In addition Gladius will see commissions for node owners in currencies other than GLA.